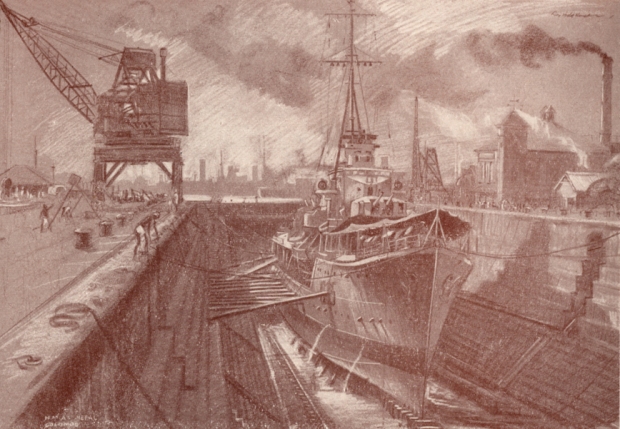 This thrilling first-hand account of a high-seas rescue takes place aboard the HMAS Nepal (G25), an N-class destroyer of the Royal Australian Navy.

Originally built as the Norseman at the John I. Thorneycroft shipyard at Woolston near Southampton in the UK, the 1,760 ton destroyer was one of two initially destined for the Royal Netherlands Navy, but when almost complete was she was virtually blown in half on the slipway by a direct bomb hit during a German air raid in December 1940. As a result, the ship was finally commissioned as HMAS NEPAL by Commander R.B. Morris RAN on May 1, 1942 – the last of the RAN ‘N’ Class to come into service.

In this account, we meet the Nepal in the Indian Ocean sometime in mid 1943, conducting operations with the Eastern Fleet out of Trincomalee in Sri Lanka.

The seaman telling the story is known only to us as ‘Maintop.’

“The Navy always has, and still does, rate seamanship well above gunnery. Our captain’s steward can thank his stars for that. Destroyer Nepal in the Indian Ocean during the war was running before a sea that looked like an immense waterfall: one enormous roaring mass of foam. Occasionally, from out of this cataract, a Himalayan sea would gain on her and dash itself against her sides in a smother of green and ﬂung white.

Down aft the captain’s steward was trying to get for’ard. He waited for a lull, found it, stepped from shelter and ran into a liquid wall that crushed him through the port rails and over the side. The lifebuoy sentry saw him go.

In such a sea the Old Man was, of course, on the bridge. Through speakers he ordered the ﬁrst lieutenant to prepare lines and a buoy; the engine-room to be ready with full power. Then, conversationally, he said: “Stand by, I’m coming round.”

Five degrees at a time the destroyer edged round to meet the frenzied seas. She rolled and shuddered as her propellers raced. Then over again, until the torn seas raced level with her rails. A ﬁnal hammer blow against her bows and she was round, slicing conﬁdently into the troughs. Such was the skipper’s judgment that no line was needed; the steward reached out and grabbed the lowered scrambling net.

Half an hour later the Surgeon Lieutenant, one hand braced against the swaying bulkhead, was operating on a compound fracture of the rescued man’s right leg.”

Naval records indicate the ‘Old Man’ in question was Commander Franklyn Bryce Morris, RAN from Wycherproof in Victoria, Australia. He commanded the Nepal from May 11, 1942 to March 30, 1944. Little is known of Commander Morris apart from his next commission which was the HMAS Ballarat (J 184), which was his charge from December 1, 1944 to June 18, 1945.

At the end of February 1945, Nepal was assigned to the British Pacific Fleet until after the end of World War II. She earned four battle honours for her wartime service:

Unless otherwise noted, the images made available on this website which are Australian War Memorial copyright are provided under a Creative Commons license.

Some of the images and content at the Rant Foundry may depict scenes of warfare, including human suffering or death, which some may find disturbing.

It may also include historically and culturally sensitive images, words, terms or descriptions; such material does not reflect the Foundry’s viewpoint but rather the social attitudes and circumstances of the period or place in which it was created.

is also listed at: